Google’s workplace wellbeing manifesto has been making the rounds on LinkedIn as of late, and it’s something that’s certainly caught our attention. Given the disruption and uncertainty workplaces have faced throughout the pandemic, there is no better time to craft and share a meaningful wellbeing manifesto.

When done well, a workplace wellbeing manifesto offers employees clarity and empathy. The examples we share in this article highlight the importance of bringing our full selves to work and offering one another kindness in amongst what is a particularly challenging time in the world.

Keep on reading to see how organisations are turning inspiration into action to deliver timely words of encouragement to their employees.

Workplace wellbeing manifesto examples from across the world 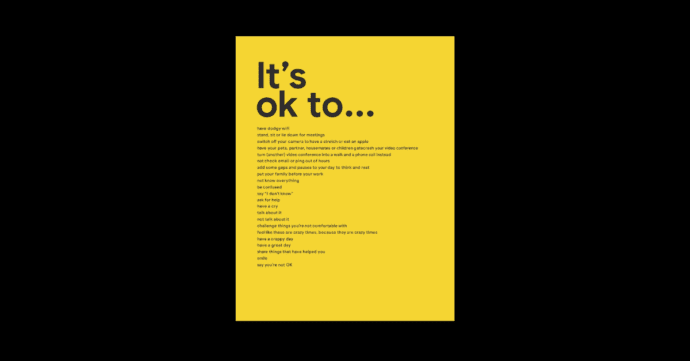 This yellow document has quickly taken LinkedIn by storm, with leaders across the world praising Google’s honesty and relatability in their workplace wellbeing manifesto. From highlighting the importance of being able to say, ‘I don’t know’ (an element of psychological safety) alongside not checking email outside of work hours (work-life balance), this manifesto is well-rounded and very encouraging to see.

Google CMO, Lorraine Twohill, explains the impact that the pandemic has had on the way they approach meetings and the importance of allowing people to be vulnerable. In particular, she shares: “We rarely talked about well-being in the past, but that had to change. It was a new muscle for us. For example, we stopped talking about our work in two of our marketing-wide meetings. Instead, we just talked about how we were doing. And it gave people permission to be vulnerable, to share, to talk, and to feel supported. We realized that making well-being a priority starts at the top.” 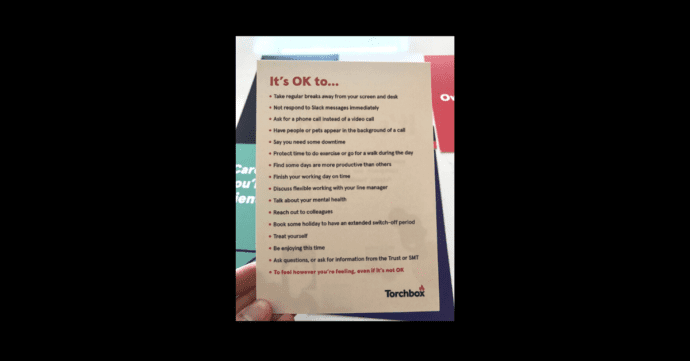 Torchbox is a digital product agency working with non-profits in the UK. In amongst a thoughtfully curated care package for their employees, the company included a physical copy of their version of a workplace wellbeing manifesto.

With a focus on mental, physical, and emotional wellbeing demonstrated throughout the manifesto, this is a great example of acknowledging things often left unsaid when it comes to wellbeing at work.

According to an employee of the company, Torchbox has a ‘wellbeing voicegroup’ that sent a set of cards to everyone in the organisation including the manifesto and one featuring 10 Slack tips for wellbeing. 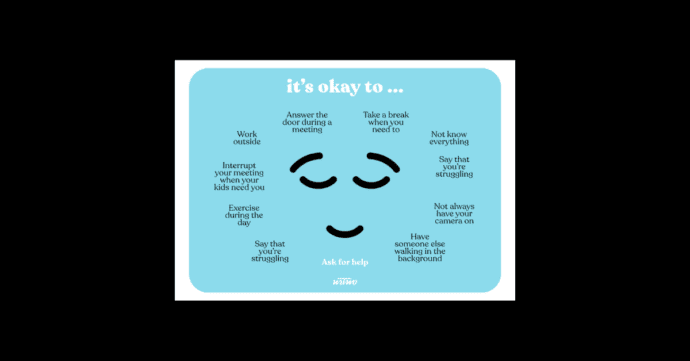 UsTwo is a digital product studio working with clients around the world from their offices in London, New York, Sydney and Malmö. Upon sharing their workplace wellbeing manifesto to Twitter, Managing Director Nicki Spritz credited their inspiration for the design to the UK government organisation, GDS.

While we really enjoyed the way UsTwo highlighted the importance of taking a break when you need to, the way they highlighted the core message of asking for help sums up their wellbeing manifesto well. 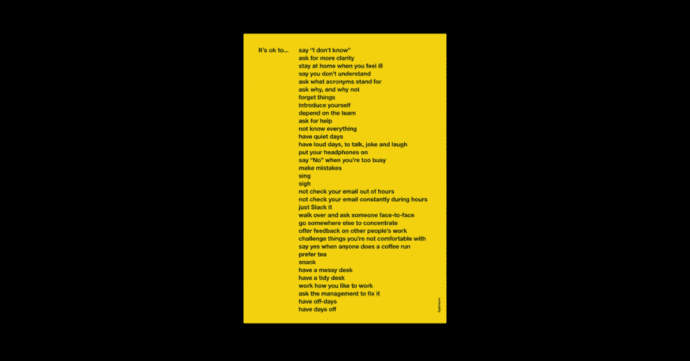 GDS, otherwise known as Government Digital Service, are a government agency of the United Kingdom and are the original trendsetters for the wellbeing manifestos we are now seeing popping up all over social media.

Back in 2016, the government organisation shared an article about their manifesto, including the inspiration behind it along with a link where readers could download the manifesto for their own usage.

Here’s what the author, Giles Turnbull, had to say about the creation of the manifesto:

“We welcomed one newcomer two weeks ago, and two more just this week. And it occurred to me: maybe it would be helpful to spell out this unofficial stuff up front, on day 1. Maybe we just need to say what’s ok. To be explicit about the things that those of us who have been here a few years take for granted. So, our team wrote a list of things it’s ok to do at GDS.”

Some of our favourite points from this wellbeing manifesto are:

All in all, we’d say this manifesto is a great example for organisations looking to create something that supports psychological safety for newcomers to a workplace. Giles has since gone on to compile a list of the organisations taking this idea further, which is where we gathered today’s examples. Check it out if you’d like to delve deeper into the concept and how organisations are putting their own spin on it.

Overall the concept of a workplace wellbeing manifesto is something that we’re excited to see taking over business platforms like LinkedIn. In times like these, it’s incredibly important that conversations around mental, physical and emotional wellbeing are front and centre. If you found this article inspiring why not take this back to your team and brainstorm what your manifesto could look like. Better yet, take the opportunity to re-evaluate your team identity while you’re at it.