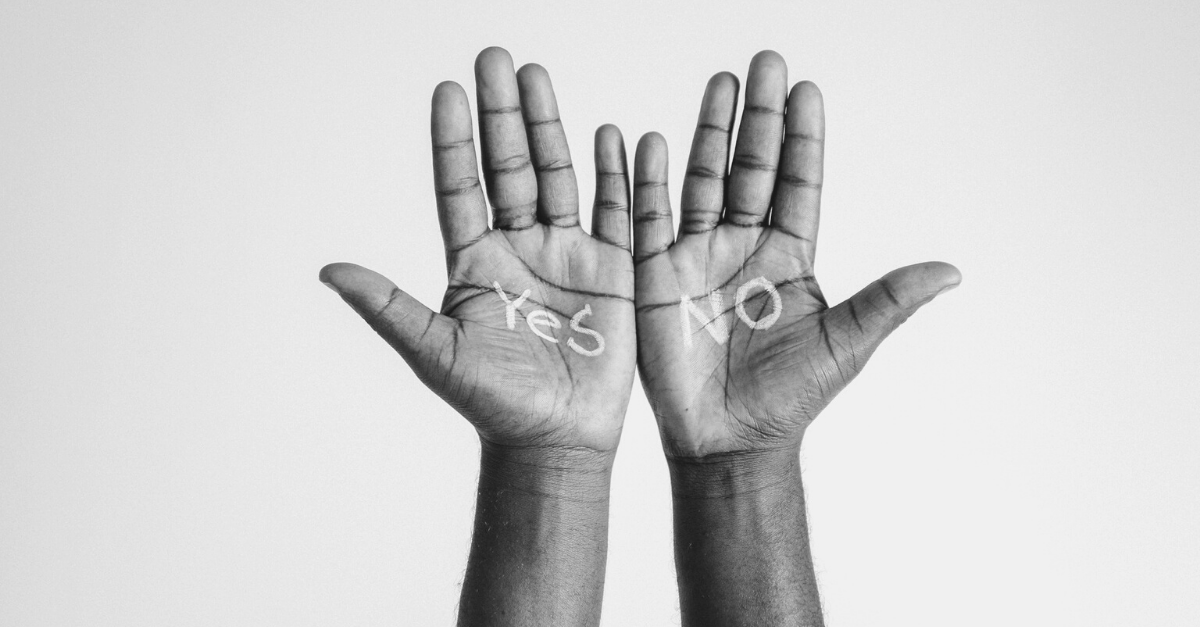 Getting comfortable saying no at work (and why it’s difficult)

If you struggle with saying no at work, you’re not alone. Many people struggle to say no to both work-related requests and personal commitments, regardless of how much they actually don’t want to do that thing.

As homo sapiens, our brains are wired to say yes to our peers thanks to a little thing called evolution. We instinctively want to avoid anything that could ostracize us from our ‘group’ as that could mean loss of resources and safety. Your ‘group’ in this context is your colleagues.

But there’s a light at the end of this tunnel – through practice and commitment to your values, you can learn how to say no at work. Read on to get to the bottom of this biological conundrum.

Why saying no is so hard in the first place.

There’s a couple of reasons (other than that evolutionary brain-wiring) that could be contributing to your struggle to say no to people, here’s a few of them:

In my own life, I’d say that I’m a recovering people-pleaser. For years I would say yes to way too many things, in the workplace and personally, because a sense of busyness made me feel that I was of value.

Age and experience have taught me the importance of staying true to my values and avoiding saying yes to things that I actually don’t want to do.

Maybe like me, you also believe that you can’t say no without hurting other people’s feelings. But, today I’m here to show you that there’s always another choice and we can learn to say no without making it personal.

How to say no at work

As with any ‘steps’ program, acknowledging you have a habit of saying ‘Yes’ to everything is the starting point. The next step is to say ‘No’ to something you don’t want to do. This is the first step in learning how to say no at work and making it a more comfortable experience overall.

To get comfortable with saying no, you’ve got to get some practice in. Start by saying no to small, insignificant requests and work your way up from there.

Saying no for the first time can be the hardest, however, practice makes perfect. Saying “no, I can’t”, and practising saying no, helps to break the habit of saying yes, by rewiring your brain. Neurons that fire together, wire together.

Step #3: Compromise if you must

If going cold turkey and saying a straight out no to something is too big of a step, make a compromise. Let’s say there’s an event that you’ve been invited to but you don’t want to go; say you are unable to attend the whole time but will drop in for a set amount of time.

Step #4: Give yourself time to respond

If a colleague has asked you to help them with a task or project that’s outside of your job scope, and you know you don’t have the capacity, say that you will need to think about it and that you’ll get back to them with a decision by the end of the day.

If the thought of not helping a colleague with a task (even though you don’t have time) fills you with anxiety, remember this, you’re being paid to manage your own workload. Meeting your own project goals are your first responsibility.

That doesn’t make you a slack team member, it makes you a responsible team member who will support others once you have completed your own tasks, if and when it’s appropriate.

Step #6: Get clear on your yeses

It becomes easier to say no to things when you are very clear on what your yeses are. Look at what’s important to your role and what you want to achieve for the week, the month and the year ahead.

When you lock downtime in your schedule for these things it becomes very clear what time you actually have available to say yes to other things, and most importantly, gives you the clarity to say no because your schedule doesn’t allow for it.

Step #7: Don’t feel the need to justify your no

If you need some more strategies for getting comfortable with saying no, Psychology Today have a fantastic list.

How to tell if you’re saying ‘no’ to the right things.

How can we know if we’re saying ‘No’ to the right things? Thankfully, we’ve all got some built-in mechanisms that alert us to a poor decision.

For me, the first awareness that I’ve made a poor decision is chatter in my head, it sounds a little something like this…

”Why did you agree to that, you twat”

“You don’t even like dress-up parties! Why would you host one?”

When we say yes to things that we really don’t want to do, we feel a sense of regret, maybe anxiety, sadness, anger, or a combination of all of these.

Saying yes to the right things gives us a sense of excitement, challenge, confidence and happiness.

Now it’s your time to go ahead and give it a go. Baby step your way to getting comfortable with saying no or jump right in and go cold turkey.

When you start, you might just feel an enormous weight lift from your shoulders that’s replaced with a light and bright sense of freedom.